On the eve of the 2014 World Cup, New York Times sports columnist George Vecsey offers a personal perspective on the beautiful game

Blending witty travelogue with action on the field—and shady dealings in back rooms—George Vecsey offers an eye-opening, globe-trotting account of the last eight World Cups. He immerses himself in the great national leagues, historic clubs, and devoted fans and provides his up-close impressions of charismatic stars like Sócrates, Maradona, Baggio, and Zidane, while also chronicling the rise of the U.S. men’s and women’s teams.

Vecsey shows how each host nation has made the World Cup its own, from the all-night street parties in Spain in 1982 to the roar of vuvuzelas in South Africa in 2010, as the game in the stadium is backed up by the game in the street. But the joy is sometimes undermined by those who style themselves the game's protectors.

With his characteristic sharp reporting and eye for detail, Vecsey brings this global event to vivid life and has written a perfect companion for the upcoming 2014 World Cup in Brazil.
Praise for Eight World Cups

"Baseball is America’s game but soccer is the world’s game, and no American writer knows more about the world’s game than George Vecsey. All of that knowledge is reflected in his terrific and timely book, which is a wonderful guide to a game whose inscrutability I have only now come to appreciate."
—Tom Werner, chairman, Boston Red Sox and Liverpool FC

"One of the Christmas gifts I received was the recent biography, Stan Musial, by veteran sportswriter George Vecsey.
"On the morning it was announced that the Holy Father had nominated me a cardinal, one of the journalists at the press conference in front of the Christmas crib in St. Patrick’s Cathedral asked if I had ever “wanted to be a cardinal.”
“'Yes,” I readily replied.  “When I was six years old.  I wanted to be Stan Musial!'”
*    *   *
"We need more Stan Musials.  He makes me proud to be a 'cardinal.'”
-- Archbishop Timothy M. Dolan, January 19, 2012

Larry spelled Stan the Man’s name right, and that is what matters – GV.

“Although Stan Musial is universally regarded as one of baseball's greatest players, he is nevertheless underrated. He played far from the national media spotlight, in America's best baseball city, St. Louis. (One reason it is the best: Musial played there.) And his amazing consistency--he got 1,815 hits on the road and 1,815 at home—made him unspectacularly spectacular.  Happily, and at long last, George Vecsey has taken Musial's measure in this delightful biography of a man and a baseball era.”—George Will

“A fascinating and profound look at the most underrated great player of all time, and one of the true gentlemen of the game, Stan Musial. No one researches a book like George Vecsey. I learned something on every page.”— Tim Kurkjian, Senior Writer for ESPN the Magazine and analyst for ESPN’s Baseball Tonight and SportsCenter. 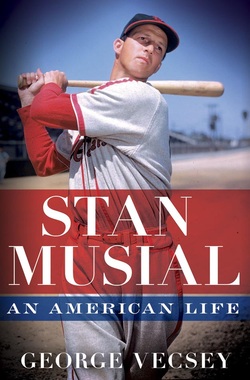 When baseball fans voted on the top twenty-five players of the twentieth century in 1999, Stan Musial didn’t make the cut. This glaring omission—later rectified by a panel of experts—raised an important question: How could a first-ballot Hall of Famer, widely considered one of the greatest hitters in baseball history, still rank as the most underrated athlete of all time?

In Stan Musial, veteran sports journalist George Vecsey finally gives this twenty-time All-Star and St. Louis Cardinals icon the kind of prestigious biographical treatment previously afforded to his more celebrated contemporaries Ted Williams and Joe DiMaggio. More than just a chronological recounting of the events of Musial’s life, this is the definitive portrait of one of the game’s best-loved but most unappreciated legends, told through the remembrances of those who played beside, worked with, and covered “Stan the Man” over the course of his nearly seventy years in the national spotlight.

Stan Musial never married a starlet. He didn’t die young, live too hard, or squander his talent. There were no legendary displays of temper or moodiness. He was merely the most consistent superstar of his era, a scarily gifted batsman who compiled 3,630 career hits (1,815 at home and 1,815 on the road), won three World Series titles, and retired in 1963 in possession of seventeen major-league records. Away from the diamond, he proved a savvy businessman and a model of humility and graciousness toward his many fans in St. Louis and around the world. From Keith Hernandez’s boyhood memories of Musial leaving tickets for him when the Cardinals were in San Francisco to the little-known story of Musial’s friendship with novelist James Michener—and their mutual association with Pope John Paul II—Vecsey weaves an intimate oral history around one of the great gentlemen of baseball’s Greatest Generation.

There may never be another Stan the Man, a fact that future Hall of Famer Albert Pujols—reluctantly nicknamed “El Hombre” in Musial’s honor—is quick to acknowledge. But thanks to this long-overdue reappraisal, even those who took his greatness for granted will learn to appreciate him all over again.

·Getting Off the Ground: The Pioneers of Aviation Speak for Themselves. (With George C. Dade.) (E.P. Dutton, 1978.)

·Joy in Mudville: Being a Complete Account of the Unparalleled History of the New York Mets. (McCall, 1970).

·The Bermuda Triangle: Fact or Fiction? (With Marianne Vecsey.) (McMillan, 1975.)